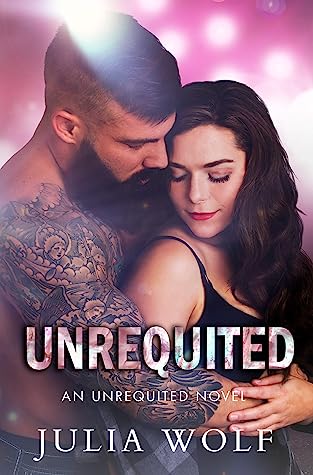 My proper southern belle mama might disagree, but I say I was born to be a rebel. From the second I got my hands on a pair of drumsticks, my future was sealed. I never fit in anyway, not with my rocker soul and curves that never take a day off.
But what’s a drummer without a band? Oh, that’s right. A cocktail waitress.
That is, until the chance of a lifetime falls into my lap—Unrequited needs a drummer, and I happen to have an ‘in’ with the band.
The only trouble is, Santiago Garza, Unrequited’s broody, scowly bassist, doesn’t want me in his band, which is kind of funny, considering he was the one who took my heart and stomped all over it five years ago.
My career is far more important than hurt feelings though, so Santiago can suck it up and deal. That’s what I’m doing, no matter how many times I remember the feel of his lips on mine. I won’t fall for him this time. I’m done being anyone’s second choice.

I never read a book by Julia Wolf before and I am positively surprised. It’s easy to read, a lot of show, not a lot of tell. Just the way I like it. It’s written from first person’s perspective in present time. The chapters are written from the perspectives of Maeve and Santiago, which I always prefer, because now I know both sides of the story.

He was the foundation I’d built my ideal man on. At least, his looks. His rotten heart, he could keep.

My review of Unrequited

I got very quickly into the story of Maeve and Santiago. Right from the start it was clear Maeve wasn’t a girl that fitted into stereotype girls and I loved that. Julia described it perfectly. Instead of just saying she was a fat girl or something, she described that Maeve’s boss normally didn’t put her in the VIProom because she wasn’t what people expected there. And later she talked about her soft curves and dips. It was done really well and not just mentioned once, but throughout the whole story. I really liked that Santiago wasn’t the only boy who was interested in her, but there were multiple throughout a longer period before and during the novel. And not just dorks or something so it was clear that even if your body isn’t perfect in the modern day standards, boys still are into you. Which is a powerful message for girls.

The relationship between Maeve and Santiago was pretty slow burn. A whole lot happened between them, but it was never DTR’d until the ending and I loved that about the story. The characters had to grow in order to come to that point. I thought the characters were really described well. It was why I felt connected to them. I really liked the characters as well. Both of them, which is abnormal for me, because I don’t like all female chars, but Maeve was very cool. I loved her relationship with Mo and Murray, the other bandmembers. And I loved how her relationship with Haeven was. Really beautifully done.

It was made very clear that Maeve had a troubled past. Her mom wanted her to be a Southern Belle, who was into the etiquette stuff and would get married and have lots of babies. But Maeve was a rockchick with too much fat on her bones (in her mothers eyes). She changed her flute lessons to drum lessons in secret because it is her passion. It was totally awesome that this story was about a girl who played the drums in a band and not this outsider girl who falls for the rockstar.

Santiago’s past played a role too. He is the dark and broody type and I’m all about that. Towards the ending you get to know him and his stuff, which gave me even more respect for him.

It wasn’t that he liked pieces of me and wished other parts were different. He liked it all.

The Naked Truth by Vi Keeland