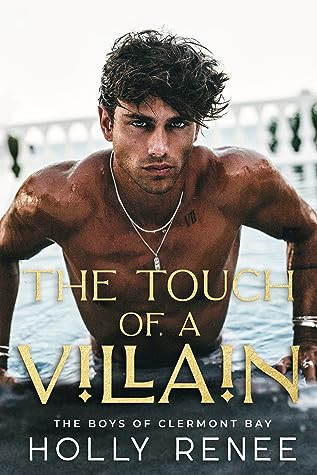 Young. Wealthy. Elite. Ruthless. The boys of Clermont Bay ruled over this town as if it was their kingdom.
And Beck Clermont controlled them all.
He was arrogant and conceited, and from the moment I met him, he had made up his mind about me.
Dangerously handsome and wickedly cruel, he had no intention of letting me spend my senior year under the radar.

The secrets of old money ran deep, and even though I barely knew them, the sins of my family had put a target on my back.
He was a hurricane, and I was unprepared for the storm.
His touch fatal. His impact irreparable.
There was no negotiation.

He stole my heart. Without warning, without permission.
He was the enemy, but that didn’t stop me from falling for The Touch of a Villain.

I received The Touch of a Villain as an ARC and I was really intrigued by the blurb.

The Touch of a Villain

Ok… uhm… this book. I just wasn’t really invested in the characters. It wasn’t the writingstyle because that was just fine. I just thought Josie was a stupid girl and most of the perspective was hers.
She knew Beck was up to something. She knew he wasn’t good for her and she just keep repeating it to herself while doing stupid shit with him.
He is using me, but I’m still letting him eat me out while I’m still a virgin… I was like okay…
It felt like everything she was into was his looks even though she kept saying she knew him on a different level. And I just didn’t understand that because they never really talked. It wasn’t until nearly the end that Beck started to open up.

And Beck… he is so heartbroken over what happened to his sister, because Lucas is such an asshole, but at the same time he is doing some rip off of that thing because he wants to hurt him back. Even though he started to like Josie. I just couldn’t understand why he wanted to be similar like him…

So it wasn’t a great read for me. It was ok, just not the plot for me. Although I would really like to know how the second book goes, because I would hope that the chars are way better in that one, because they need a chance to grow.