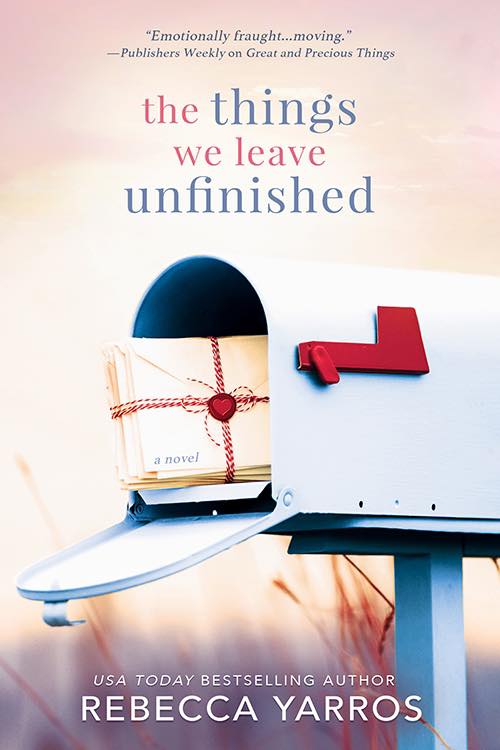 Twenty-eight-year-old Georgia Stanton has to start over after she gave up almost everything in a brutal divorce—the New York house, the friends, and her pride. Now back home at her late great-grandmother’s estate in Colorado, she finds herself face-to-face with Noah Harrison, the bestselling author of a million books where the cover is always people nearly kissing. He’s just as arrogant in person as in interviews, and she’ll be damned if the good-looking writer of love stories thinks he’s the one to finish her grandmother’s final novel…even if the publisher swears he’s the perfect fit.

Noah is at the pinnacle of his career. With book and movie deals galore, there isn’t much the “golden boy” of modern fiction hasn’t accomplished. But he can’t walk away from what might be the best book of the century—the one his idol, Scarlett Stanton, left unfinished. Coming up with a fitting ending for the legendary author is one thing, but dealing with her beautiful, stubborn, cynical great-granddaughter, Georgia, is quite another.

But as they read Scarlett’s words in both the manuscript and her box of letters, they start to realize why Scarlett never finished the book—it’s based on her real-life romance with a World War II pilot, and the ending isn’t a happy one. Georgia knows all too well that love never works out, and while the chemistry and connection between her and Noah is undeniable, she’s as determined as ever to learn from her great-grandmother’s mistakes—even if it means destroying Noah’s career.

Told in alternating timelines, THE THINGS WE LEAVE UNFINISHED examines the risks we take for love, the scars too deep to heal, and the endings we can’t bring ourselves to see coming.

I received The Things We Leave Unfinished as an ARC and I couldn’t wait to read it. Rebecca posted a lot of teasers and saying I was curious is an understatement.

The Things We Leave Unfinished

Every time I pick up a book from Rebecca, I know I’m going to cry, but this time…
This time I was off my toad during the entire damn book. I have not cried once… no, I have cried a hundred times.

The Things We Leave Unfinished made me shiver and I will never let go of Scarlett, Jameson, Georgia, Noah and Constance again. She wrote them straight into my heart.

It is literally the first book that has given me so many feelings and I just don’t know how I will ever recover from it.
I dreamed about them, I thought about them while awake.
The story is intense, full of love and so many emotions. Everyone should read this.

The World War II pieces were so beautiful and amazing. The parts in the here and now were so good too. I just have no idea what I have to say about the story and storyline without spoiling anything.

Rebecca writes about love in a way that makes you long for that feeling. I would like to emphasize again that I wanted to speed read the entire book, but at the same time was very reluctant to continue in it. Mind you, it was for all the right reasons.

Thanks for this story, Rebecca. And also nice that you showed Jason that I had to stop reading at 41% because my father-in-law was sitting on the couch and I didn’t want to cry in front of him … really great.