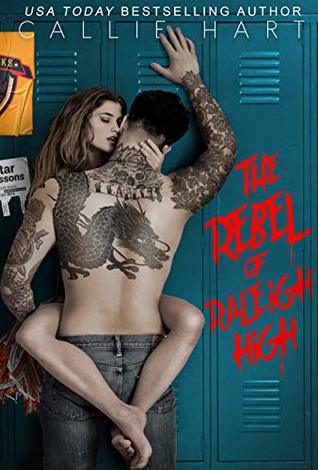 * The Rebel of Raleigh High is the first book in the Raleigh Rebels Series. Please be advised, this book comes with a trigger warning. Intended for readers 17+ *

There’s nothing that the students of Raleigh High can do to Silver Parisi anymore. Over the past year, she’s had to endure more pain and suffering than most people are asked to bear in their lifetimes. She’s a pariah, an outcast, a ghost. She’s also never been one to take shit lying down, though…despite what half the football team might say.

With only one hundred and sixty-eight days left of the school year, it won’t be long until graduation, and Silver’s planning on skipping town and leaving Raleigh firmly in her rearview mirror…

Until he comes along…

Orphan. Degenerate. Reprobate. Deviant. Alex Moretti’s earned most of his labels, and he’s not ashamed of a single one of them. He’ll earn far worse before he’s finished with his new found ‘friends’ at Raleigh High. Having spent years being ground down under the boot heel of society, it’s time for a little payback. And if exacting revenge upon the heads of the Raleigh elite means he can also help the beautiful girl who hovers in the shadows, then that’s all for the better.

Oil and water. Fire and ice. The differences between Silver and Alex are broader than any chasm. To reach one another, they must take a leap of faith and fall into the divide.

Nothing good ever came from falling.

Callie has written The Rebel of Raleigh High with a lot of show, which gave me a good insight into the school and it’s students. The story gets told from both Silver and Alex’ perspective. I love that, because it gives me a good insight in their thoughts.

Just…stop. Quit hiding from the hard stuff. I’m not fucking hiding from it. Not anymore. If you can’t just be real for one second, then I’ll do it for the both of us.

My opinion about The Rebel of Raleigh High

Silver… was different, but I could relate to her on most of the subjects. She made logical choices, which made me understand her. She once was one of the popular girls, to whom other girls looked upto. But now… Now she was an outcast. I could totally understand what she’d done, and I would’ve definitely done the same.

Alex… sweet, handsome, tough Alex. He’s my perfect guy. The bad guy with a heart of gold. A guy for who Mariel falls flat on her face for, so I did exactly that for this one. So young, but has been through so much already. I just want to take him home.

What about the story?

At first everything is about Silver, or, well… Silver and Alex. Alex listens to nobody, and does exactly what Alex wants, which is falling in love with a girl everybody hates. Despite the warnings to stay away, he doesn’t. And when Alex finds out why he shouldn’t be friends with Silver, he gets furious. Together they come up with a plan.

The beauty in this story is found in the way Silver and her father look at Alex. They managed to look further than his exterior, because nobody ever looks the same from the outside as they do from the inside. This story is about prejudice and how they most often don’t match the truth. To form your own opinion.
And Silver’s mom? She’s different… but you have to read that for yourself.

And then the plottwist came. That fucking plottwist, which managed I couldn’t stop reading anymore. It held me captive and it was in an aweful way amazing. The ending was beautiful and now I just want more.

She crooks an eyebrow at me, and I mirror her expression, making her smile.
Fuck. Me. Dead.
I made her smile.
…
God, how am I ever going to be worthy of this girl? I have no clue, but I’m gonna figure it out if it kills me.

Review of another bully romance in Dutch is found here!

The Envy of Idols by C.M. Stunich