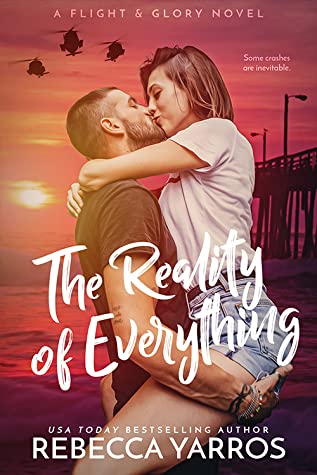 Two years after the man she loved was killed in Afghanistan, Morgan Bartley is trying to put the pieces of her life back together. The reno on her dilapidated beach house in the Outer Banks might be just the distraction she needs to keep her debilitating anxiety attacks at bay and begin to heal her heart...if she can ignore the ridiculously handsome guy next door.
At twenty-eight, single-dad Jackson Montgomery’s life revolves around his five-year-old daughter and his job as a search-and-rescue pilot for the coast guard. He’s no stranger to saving a damsel in distress, and though his gorgeous new neighbor is clearly in distress, she’s no damsel. She’s stubborn as hell with walls a mile thick, and the dog tags hanging from her rearview mirror give him a pretty good clue as to why.
It doesn’t matter that their attraction is undeniable―she swore she’d never fall for another pilot, let alone a military man. There are some wounds time can’t heal, and some fears too consuming to conquer.
She’s a barely breathing heartbreak on the edge of recovery.He’s a crash waiting to happen.Together they could have it all...if they can endure the coming storm.

I was very curious about The Reality of Everything. The fifth part of The Flight and Glory series. Before this I read part 1 a long time ago, but parts 2 to 4 are missing here. I will notice if I get spoilers (I think so), but I won’t mind.

Rebecca … writes emotionally, visually and you get sucked into the story in no time. She switches alternately between the male and female lead of the story. Her men are realistic and her women aren’t annoying (I often suffer from that. I know that’s on me). I love her writing style. When I read Rebecca, I am 99% sure that I need at least 1 tissue. Even if it is only 1 tear …

The Reality of Everything

In a distant past I read part 1 of the series in Dutch and I was not a fan of the translation. I loved the story itself, but the translation kept pulling me out of the story. After Annabel urged me to really pick up Rebecca’s books in the English language again, I did. I started with The Last Letter and Great and Precious Things (both also available in NL) and I finally understood why she was so good. So I signed up for Part 5 The Reality of Everything despite having to read 2-4 (will do).

And boy am I glad I did. Despite a huge spoiler for part 4 (so pay attention) and a few mini spoilers (own fault) I really enjoyed this story. Again I shed a tear and boy am I interested in the other parts.

Note spoilers for 2-4 below. So if you haven’t read it … stop here!

When Will died two years ago, Morgan was left behind. No HEA for her and that hurt. Besides losing her Will, she also lost the chance to be happy with him just like her friends have with their boys. She had to fight so hard for him and then he didn’t choose her.

Now she has finally put the money he left her into a house on the beach. One that needs an enormous renovation, just like her.
Jackson is her new neighbor, along with his daughter, and wants to help her. None of this goes without saying, because Morgan is broken. Just like her house. Morgan goes through a fierce process of accepting the loss and everything around it and I got completely carried away. It’s wonderful and deeply described and I love the characters. They are complex and human and real. And Gods… the things I wanna say, but can’t because more spoilers. Just read it. I loved this and I really felt the whole army wife stuff. Thank you Rebecca!

Pay attention because this is a heavy story.

Conclusion of The Reality of Everything

Although I now have a spoiler for Hallowed Ground and Eyes Turned Skyward through my own fault, I really loved this book. I will soon get to the other parts!

The Risk by Elle Kennedy