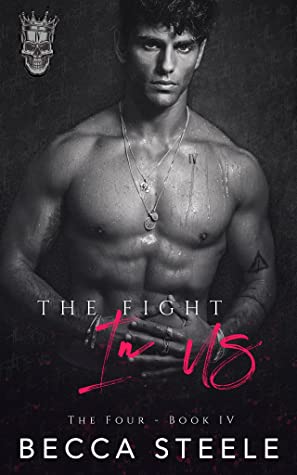 Weston Cavendish. My brother's best friend. I'd perfected the art of pretending that I didn't want him, that he didn't affect me every time he was near.
Or so I thought.
When his world comes crashing down, I'm the one he turns to, and I can't deny my feelings any longer.
I know there's something between us.
Until he finds out that I've been hiding things from him, too.
Broken and betrayed, can we pick up the pieces and work together to expose the truth?
The odds are stacked against us.
But I won't give up without a fight.

The Fight In Us is a standalone story, but is best enjoyed after the previous three books in the series. This mature new adult romance may contain triggers for some readers.

I got the chance to read the first three books of this series (not on the blog yet, but on goodreads) and then read The Fight In Us. This is my first series by Becca Steele and I was really curious.

The Fight In Us

God… I’m a girl who goes for the bad, pensive boy, so I loved Caiden. He is my man. But this book …

Weston is the Sam to Caiden’s Dean. Yes, a Supernatural reference, but it’s exactly how I can best describe them. And West is so cute and delicious. Terribly tasty.

And Lena is so cool. I want to be like Lena. Just say what’s on my mind and sometimes be a little reckless, dare to do more.

I loved these characters, I loved their dynamics and how it was not just about the love, but the plot and the dynamics in the group and everything. There is a dark edge to this story that gives The Fight In Us depth. It’s not just any girl and boy falling in love, but they are looking for the organizer of dog fights and trying to expose this. It’s so much more than just a love story.

Actually, the romance is more of a side issue and that’s what makes this series so good.

Becca makes you feel like part of the Four, not just a spectator, and I love that about this series.