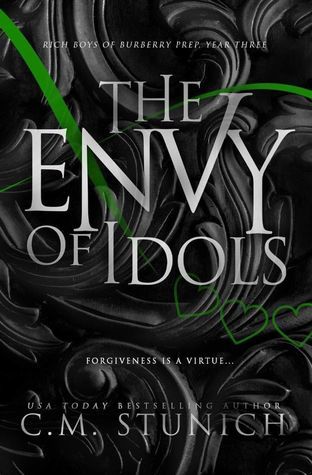 Share the new girl. That won’t be easy, will it? Especially not while trying to keep our thrones in the Burberry Prep social scene. Marnye is learning to forgive us; the least we can do is protect her. Let’s see who can make her fall in love first. This time, there’s no bet. This time, it’s just our hearts on the line.
***
Take on the filthy rich girls—and do it with the help of the boys. It’s us versus them, and it’s not going to be pretty. The king of the school, a pissed-off narcoleptic, a tattooed rockstar, a varsity football player, and a prince. Five guys to back me up, five boys that give me butterflies. They say they’ve changed their ways; it’s time to see if they can keep that promise.

I couldn’t wait to read The Envy of Idols. The 3rd part of the Rich Boys of Burberry Prep serie was one I looked out for! Today you’ll find out if it was worth it.
I previously read the first part and the second part.
If you want to buy it, you can on Amazon.

CM Stunich has a beautiful writing style. Rich Boys of Burberry Prep is written from Marnye’s perspective. I find myself getting used to all the books I read to also read the men’s perspective, but it doesn’t bother me at all at CM. The men are also hardly mentioned in another series of hair. Yet they live enormously and she describes them beautifully from the female protagonist. As soon as she lets Marny name who’s there without a name, I already know who it is. Her descriptions are spot on. The building lives for me. Yes, there is a map in the front of the book, but I really can’t remember what it looks like. Because of the way CM writes, I can see everything in front of me. Great job!

My thoughts on The Envy Of Idols

This time the story just moved on. The boys were clearly in Marnye’s aide of things. But it wasn’t like everything was suddenly ok now. Marnye finds it hard to choose between them. She doesn’t want to lose anyone of them and she loves them all, but at the same time she’s struggling with that. Because it isn’t considered normal to love multiple people and date them.

The girls are still out for revenge. Which means nobody is save by themselves. So they chaperone each other. They’re only safe in their rooms.

The infinity club is still dangerous and they know they’re plotting some kind of dark plan. And the ending just killed me.

I loved how this time it was mostly about the growth of the boys. It was set about how their world personally affected them and I loved to get an inside.

Again very strong. Can’t wait for the last one