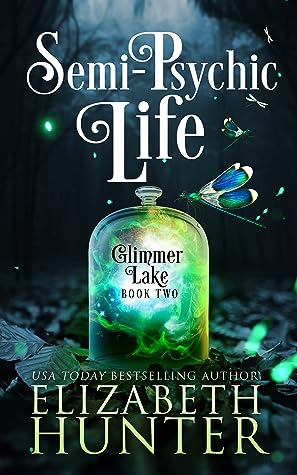 A Paranormal Women's Fiction with a bit of class, and a lot of sass, for anyone who feels like age is just a number!
Who says you can’t live the rock and roll life after forty?You just need a lot more vitamins and a bigger bottle of aspirin.
Valerie Costa was pretty sure she was rocking her forties. She had an amazing coffee shop, two cool teenagers, and a new superpower that gave her insight into any random object she touched.
Okay, she wasn’t thrilled about that last one.
Ever since Val and her two best friends had driven their car off the edge and into Glimmer Lake the year before, Val has struggled with her new abilities. She’s not exactly sure she wants to be psychic, she could live without her newfound glove addiction, and honestly no one wants to know that much about their teenage sons.
But when Val’s ex-husband goes missing, and police show up at her door with questions she can’t answer, Val, Robin, and Monica are going to have to use their sudden psychic abilities to solve a mystery none of them saw coming.
Semi-Psychic Life is a standalone paranormal women’s fiction novel in the Glimmer Lake series by USA Today bestseller, Elizabeth Hunter, author of the Elemental Mysteries and the Irin Chronicles.

I’ve never read anything by Elizabeth Hunter before. It is part 2 of the Glimmer Lake series, but it should be readable as a stand-alone. I read it separately and below you can read whether it can really be read separately.

I’ve never read something like this, but I read a PNR before. The review can be found here.

I had to get used to it because Elizabeth Hunter writes from the third person. I hardly read that so it took some time. But the writing style is so nice that I was used to it within 2 pages. It feels like you are looking at Val and her life. It is written with a lot of jokes and funny stuff and you immediately feel connected to the world and the character. I thought it was a wonderful writing style. I sure want to read more of it.

This is my first ARC from Social Butterfly. I didn’t know the author yet, but I saw a call in their facebook group and got intrigued by the blurb. It sounded really funny.

This book really isn’t super PNR. Actually it is almost a normal romance / detective like thing. The only difference is that the main character and her 2 friends occasionally have clairvoyant experiences. All three in a different way.

Val is a super cool woman in her 40s with 2 sons. A teenager and a middle scholer. She’s an average single mother who works hard in her coffee shop. She has nice staff, nice and less nice customers and tries to sail her life as good as possible with her half absent ex.
The whole story is written in such a dry and humorous way. Val has to find her ex, who has suddenly disappeared from the face of the earth after a half-hearted voicemail and the police is looking for him. She goes to investigate with her friends.

Imagine a woman in her early forties, having her hair shaved on the sides and dyed purple, and a long brown strand in the middle. In addition, she is somewhat sturdy, owner of a coffee shop. Since recently she gets visions when she puts her hands on an object that belongs to someone. Even when she does the laundry of her sons’ clothes. In other words, Val often wears gloves, because you really don’t want to know much about others. Not that much anyway. It is hectic and recognizable (without all the psychic stuff).

I really enjoyed this book and I finished it in a day and a half. Awesome. I really want to read something from this author more often.

Do you want to buy this book? Check out Amazon!