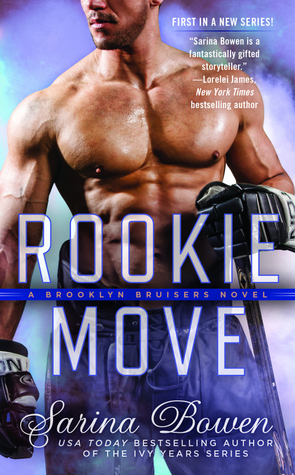 The first novel in a sexy new series featuring the hockey players of the Brooklyn Bruisers and the women who win their hearts—from the USA Today bestselling author of the Ivy Years series.

In high school they were the perfect couple—until the day Georgia left Leo in the cold...

Hockey player Leo Trevi has spent the last six years trying to do two things: get over the girl who broke his heart, and succeed in the NHL. But on the first day he’s called up to the newly franchised Brooklyn Bruisers, Leo gets checked on both sides, first by the team’s coach—who has a long simmering grudge, and then by the Bruisers’ sexy, icy publicist—his former girlfriend Georgia Worthington.

Saying goodbye to Leo was one of the hardest things Georgia ever had to do—and saying hello again isn’t much easier. Georgia is determined to keep their relationship strictly professional, but when a press conference microphone catches Leo declaring his feelings for her, things get really personal, really fast....

I spent six years trying to get over you, and it didn’t take. Our time is now.

Besides Elle Kennedy, my other favorite New Adult author is Sarina Bowen. And so I was again very happy to read this book. I thoroughly enjoyed her great writing style again. As always, she writes from the ego and from both characters.

“… I want a guy in my life. I want a partner, and kids. I’d go gay for you, hon, but adoption is expensive. And then there’s the matter of your not having a dick. ”

“It’s always something with you.”

What do I think of Rookie Move

I had to get used to the names. Leo and Georgia. Ugh. Leo was explainable because he was very Italian, but Georgia… so old English. But okay, once through that it was super fun again. Ice hockey and handsome men are always good. And I understand Georgia very well. On the other hand, it was so incredibly cute how tenacious and understanding Leo was and how well he explained how he felt. They both made me almost forget they had those stupid names. Except when they were said haha.

“She’s a total bitch on wheels.”

The comment didn’t startle Georgia at all. Nor did it just offend her. Forthright men in the workplace are revered for their strength. Women? You can either be a doormat or a bitch. Take your pick.

I loved reading it again