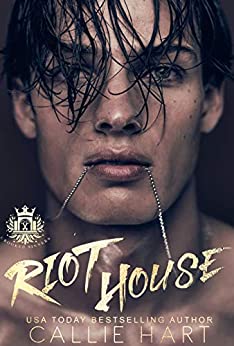 They might be richer than gods, but they’re morally bankrupt. As far as the boys who run America’s most exclusive international academy are concerned, I’m an unwelcome interloper, an inconvenience, and they’re determined to make my life a living hell.
When Wren Jacobi sets eyes on Wolf Hall Academy’s newest inductee, all he sees is an easy mark. A reserved little girl with a target painted on her back. He knows nothing of my troubled past, though. Nothing of my mother’s suspicious death, or the horrific treatment I’ve had to endure at the hands of my psychotic father.
And he has no idea of the lengths that I, unassuming little Elodie Stillwater, will go to in order to break the savage beast who dreams of breaking me first.
There’s a wolf stalking the forests that surround my new school. Little does he know…There are far scarier predators lurking out there in the dark.

I’ve heard a lot about Riot House. All positive so I have very high expectations. I wonder if Callie can make them true.

I think the cover of Riot House is really cool. I don’t normally like faces, but when you read the book, it looks a lot like the main character. Callie already indicated this herself. I think this is a really striking photo. The gold and font of the letters also appeal to me immediately. I also like the logo on the front, because I like to read series and that tells me that it is the first part of a series.

The story itself is written expressively. I have already met Callie in her other series and know that I like her writing style. It is a speaking style from the first person.

Riot House is about Wren and Elodie. It’s a dark bully romance and it has a promising start. Wren gives off a dark vibe and the first day in class he isn’t very friendly. However, that quickly changes.

I found this very unfortunate about the story, since it’s a bully romance, I quite missed the bully part. In addition, the other characters indicated that Wren can / is really terrible. And I completely missed this. I think he warmed up too quickly to Elodie and soon turned around completely.
Nevertheless, some strange things are happening.

The story has a long structure. I understood that it was necessary, but sometimes it took a long time before something exciting actually happened.
However, the denouement was super strong, just like the final problem. I thought it was a good book with beautiful quotes, but for me it could have been a bit darker. As a result, it has not fully met the high expectations for me.

I got to know the side characters well. Callie worked it out very well. I am therefore very curious about the subsequent parts about the other boys who live in Riot House. The story also kept my attention and I kept reading, despite the high number of pages.

Return Once More (The Historians #1) by Trisha Leigh