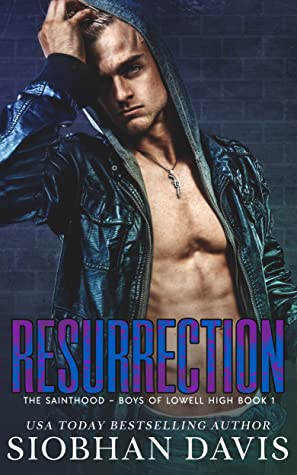 A new dark romance from the USA Today bestselling author of the Rydeville Elite series.
Everything changed the night my dad died.
The night I met Saint, Galen, Caz, and Theo.
Those manipulative a-holes set out to ruin me after our hot night together, but they didn’t realize you can’t destroy something that’s already broken. And it only works if the victim cares.
Which I don’t.
Because I’ve been in hell for years, and nothing penetrates the steel walls I’ve erected.
Until The Sainthood decides I belong to them and cracks appear in my veneer. Their cruel games, harsh words, and rough touch awakens something inside me, and now, I’m in trouble.
They draw me deeper into their dangerous world, until I’m in the middle of all the violence and gang warfare, tangled up in all the secrets and lies, and there’s no turning back.
Because they own me.
And nothing has ever felt so right.
I’m exactly where I should be.
But with enemies on all sides, survival becomes a deadly game with no guarantees.
And, sometimes, saints become sinners.
Due to mature content, this book is recommended to readers aged eighteen and over. This is a full-length reverse harem dark romance novel with enemies-to-lovers/bullying themes. Cannot be read as a standalone and ends with a cliffhanger. Book 1 of 3.

I read part 1 of this series: Resurrection because I saw that I could sign up for Reign, but this was part 3 in this series. But before that I was allowed to read part 1 Resurrection and 2 Rebellion. Since I was looking forward to a Dark High School Bully Reverse Harem book, I decided to do this. It is my first Siobhan Davis book, after the advice of friends.

Siobhan Davis puts down a strong first part of a High School Bully Reverse Harem with Resurrection. I am completely drawn into the story from moment one and actually not released at the end. The story is completely told in the first person from Harlow. I like to look into the minds of the men, but actually didn’t miss it at all in this book. It’s all written very expressively.

Resurrection is about Harlow and her childhood and how she got here. I divide this into two parts. One before living in a house together and during …

Resurrection begins with Harlow mourning her father. She was just informed that he had an accident. She ends up drunk at a party and catches her boyfriend cheating on her. To get away from him, she dives into a room where Saint, Galen, Caz and Theo are sitting. They belong to a gang that does not belong to her boyfriend and she decides to take him back and have sex with them. All four, yes.

A few months later, the four suddenly appear at her school. Harlow doesn’t quite understand why because The Sainthood – the gang they belong to – have relatively little to say in her village. But they want to change that.

And then suddenly they move in with her. Her mother seems to have had a relationship before her father with the leader of The Sainthood. This stirs up enormous feelings for Harlow because she was kidnapped and severely abused as a child. All she can remember is Sinner … aka her mom’s new boyfriend.

Meanwhile she tries to find out more and more about her father, about Sinner and her mother and about her kidnapping. That while the 4 gentlemen taunt her and want to thwart everything.

This first part has been put down so strongly. It really paves the way for a hugely good storyline. Despite the harassment, Harlow and the boys grow closer and they gain more insight into each other. They may not even be that far apart in terms of goals.

This book made me want more, more, more. I wanted to know what had happened. And why Theo had this reaction to Harlow and what happened before the book started. I wanted more Saint. More Caz and I also wanted to know why Galen was such an asshole. There are so many storylines in this book … wow.

Very good first part in this series. I want more, more, more and luckily I already have part 2.