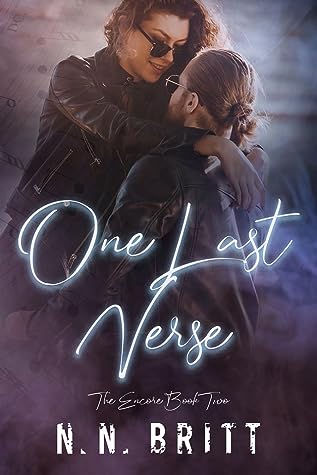 Promises will be broken. Love will be tested.
Cassy Evans knows a thing or two about secrets. By juggling work and a hidden relationship with the world’s biggest rock star for months, she’s become an expert.
However, being with Frank comes at a price. Seven years after the accident that almost ended everything, his trauma still haunts him. Determined to get back on stage, the man known to the world as Frankie Blade would do anything to ensure the success of his band’s reunion. But when one rash decision puts his entire career on the line, it’s not clear if he can recover from it.
As Frank spirals out of control, pushing Cassy away, she has to face the reality of what they’ve become. He’s harder to love than she imagined. Her common sense tells her severing all ties with him is the right choice.
Problem is, she can’t leave without her heart. And Frank doesn’t want to give it back.
One Last Verse is the conclusion of Frankie and Cassy’s story. It should be read after Final Serenade.

One Last Verse is part 2 of the Encore Duet and I wonder if she can keep it up so exciting and separate.

N.N.Britt has a pleasant writing style. The book is from one perspective, that of Cassy, and in the present tense written from the first person. It is easy to read and she writes about stuff in a very visual and substantive way. I really liked that about this story. The emotions were very raw. I loved that.

At the start I had to get back into the story. I didn’t feel like going into the world and the characters again. But soon N.N.Britt made sure I got sucked into the story again. The emotions were clearly palpable with Cassie, although I sometimes found it difficult at first why she was so invested in the relationship.

The latter became more logical as the book progressed and this made me more attached to the story. The connection therefore got better for me and then I managed to read on.

In the end I thought it was a good story that was very well worked out. The latter in particular is the deciding factor for me to the four stars.

Conclusion of One Last Verse

Very nice duet. Especially if you really want to go deep into the characters. And I mean especially the well-worked details in the jobs.