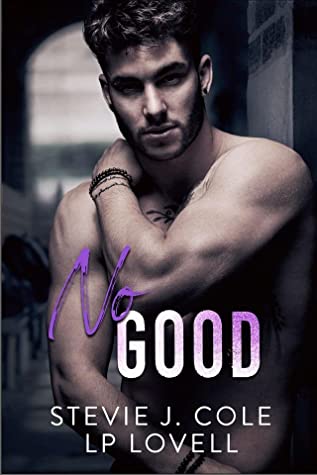 He was the reprobate king of Dayton high. I was the bitter princess cast out of my kingdom. And we were at war.
It started off with a lie, and a one-night stand gone terribly wrong. Although I knew nothing good would come from my encounter with Bellamy West, the small town’s gorgeous bad boy, I didn’t expect him to throw jet fuel onto the already flaming wreckage of my life. Then step back with a sexy smirk on his face to watch me burn.And burn I did...
He got me fired.I got him arrested.We were enemies until we weren’t. Until one touch went too far, and I found myself craving each dirty word. Every filthy promise.Bellamy West was no good, and I wanted to be bad.
Screw falling for Prince Charming, I wrote my love story with the villain.And for that, I paid..

I couldn’t wait for No Good. A new book by LP Lovell and Stevie J Cole, of which I previously read No Prince. I immediately registered for the arc when the application form came in. Part 1 is coming in Dutch, so stay tuned;)

I don’t like this cover as much. I always hate it when you see eyes on a cover. I think his body and all that jazz fits Bellamy, but I don’t like the eyes of this boy, so for me that detracts me a bit in the cover.

I have read books by this duo before so I already knew the style of Stevie and LP. Also this book the style is just raw and it becomes clear that these young people have a hard time. I like the style in which it isn’t disguised and made more beautiful then it is. The differences between rich and poor are beautifully described.

I had to get into it. With No Prince I was immediately hooked by the story and I immediately had a click with Zepp. That was very different with Bellamy. Where Zepp was an obvious leader and radiated this, Bellamy is not. At school yes, because Zeppelin is not there and he is clearly taking over, but Bell’s general attitude is different. Nothing wrong with that, of course, because they are 2 different guys. And that’s what I really like about Lovell and Cole’s writing style. You really know who you read.

Slowly but surely we saw the real Bellamy and not the bastard at school and actually from about a quarter into it (so pretty quickly) I really started to enjoy the story, the pulling between them, because that’s what Bellamy and Drew do. This is another hate-to-love story and I love it.

The message behind this story is ultimately just as good as with No Prince. And I even had to shed a little tear. Just a small one, but half a star extra for that.

Conclusion of No Good

I really enjoyed it!