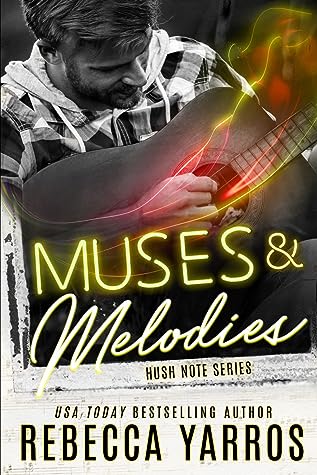 If I can keep Hush Note’s leading guitarist, Nixon Winters, on the straight and narrow for the next six months, I’ll finally get my own band to manage—assuming we don’t kill each other first.
The egotistical, irritating rock star is fresh out of rehab, but it’s obvious his demons followed him home—and now I’m sleeping down the hall. I’ve watched him self-destruct every summer, and with album deadlines and tour dates looming, I can’t let it happen again. My career is in his hands.
But tattoos can’t cover every scar, and I’m starting to see through his trademark, irresistible charm to the damage beneath.
Everyone wants the rock star.I’m falling for the man.
If he doesn’t let me in,he’ll never break the cycle—And when these six months are up,I might be the one left broken.

I was very curious about Nixon’s story in Muses & Melodies. He is the third band member. I read part 1 before this, which I will also post a review of that and Nixon sounded like a real Mariel-man. So very curious.

Rebecca… writes emotionally, visually and you will be drawn into the story in no time. She alternates between the male and female protagonists in the story. Her husbands are realistic and her wives aren’t annoying (I often suffer from that. I know it’s just me). I like her writing style. When I read Rebecca I’m 99% sure I need at least 1 tissue. Even if it is only 1 tear …

Nixon. The third band member of Hush Note has been through a lot. It ensures that he cannot normally go through the summer and starts drinking. This time, he tucked himself into rehab and now that he’s out, the record label gives him a nanny. Who? Zoe Shannon with the stick up her ass. Stiff Shannon.

The idea is that Shannon is immune to Nixon’s charms. But slowly Zoe sees a different Nixon from the arrogant bastard she knows. Meanwhile, Nixon feels more and more trapped in his Seattle apartment because outside there are temptations everywhere. He needs a place where he can slowly get used to that temptation. His idea: Zoe’s birthplace.

There he rents a huge holiday home where they go together. Nixon gets to know her family and friends there. Slowly, he also sees that Zoe is more than the straightforward planner who doesn’t want to bend. They grow closer and closer, but Nixon has trouble lowering his walls.

Nixon is exactly a man who fits up my alley. He is sensitive, but at the same time incredibly tough. The guitarist of the band who has trouble showing his emotions. I love this. I also found Zoe a nice character. She didn’t wine, but gave him space, saw who he was, without complaining about him. In this book you see how both characters continued to grow. Towards each other, but also personally. And yes, here too I shed a tear. Not much, but I shed one or two. Damn, Rebecca…

I really enjoyed the story and added another Book Boyfriend to my way to long list.