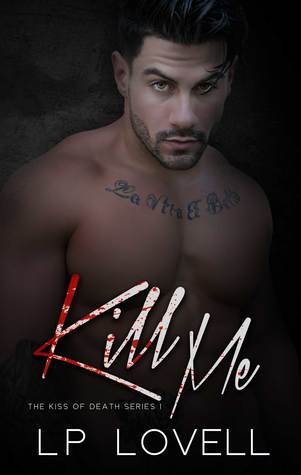 Una
To many, I am little more than a myth. The Kiss of Death, a hired killer, revered by some of the greatest criminal organisations in the world. Trained by the bratva themselves, without conscience, without mercy, the perfect soldier. I’ll kill anyone… for a price. Death doesn’t discriminate, she sells to the highest bidder, but even I have a weakness.
Nero
I want one thing—power. But power is merely a game of strategy. The pieces are on the chess board. Death is my queen, and also my pawn. She’ll paint this city red in exchange for the one thing she wants. Now all I have to do is watch it all play out. She’s nothing more than a weapon, and yet, I find myself wanting to dance with death, to possess her. And I always get what I want.
A game of power. A risk that could cost her everything. An obsession that would see the world burn at their feet. A bloodied king. A broken queen.
Kill me or kiss me?

I wanted to read Kill Me because I know it’s coming in Dutch. The date is not yet known, by the way. Earlier I already read Wrong and Loathe Me from this author.

Kill Me is a Dark Romance and you can tell from everything. Both main characters aren’t cuties.

The story is written smoothly and you can easily read it away. The style can be compared to Wrong if you have already read it. Of course, half of them is also the same author, but sometimes alone can be a little disappointing. That really wasn’t the case now.

This book is again wonderfully descriptive and does not hold back from you. The world of Mafia, Bratva and the quest for power is well described.

Kill Me’s setting is America. It is not immediately recognizable by definition, but you can feel it from everything that it really looks American, despite the fact that the writer is English. It’s written very realistically and I also find the bonds within the Mafia very well developed and described.

The characters are both very well developed. They almost seem to come off the paper. Una, I find a great feminine character. Very often you read about the “normal” girl who kind of accidentally falls into the world and falls in love with the big, bad, handsome leader. In this case, Una is almost more deadly than Nero is. She can hold her own and really does not need a knight in shining armor. Fortunately, because Nero is anything but that. Rather, he’s the monster under your bed. Nero doesn’t shy away from corpses to gain power. And that’s what he wants: more power. And Una has to help him with that. After all, she is the Kiss of Death and together they are more powerful. She can remove leaders who get in the way of Nero. But the price that Nero hangs over her head…

The plot continues well and there are some exciting points where you really hold your breath. And yes, this book also contains sex. And this sex is not sweet and cute and all that jazz. It’s the way the characters are and I think it fits the story and the setting perfectly.

I really enjoyed this story. It is well put together and I was able to empathize with the world, which is very nicely described. Lauren writes very nicely in show so you can see everything clearly. The characters are so well put together that I feel like I really got to know them. I would recommend this book to someone who really likes Dark Romance and enjoys broken characters and the underworld.

Very good Dark Romance that is more than worth its money. I would like to read more from this author and also continue with this series.