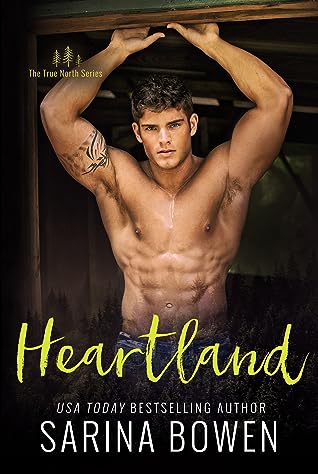 An emotional friends to lovers romance full of risky secrets and late-night lessons in seduction.
Dylan is my best friend, and the only person in my life who understands me. He doesn’t mind my social awkwardness or my weird history. The only glitch? He doesn’t know that I’ve been hopelessly, desperately in love with him since the first day we picked apples together in his family’s orchard.But I know better than to confess.Now that we’re both in college together, I’m seeing a new side of him. College Dylan drinks and has a lot of sex. None of it with me.Until the night I foolishly ask him to tutor me in more than algebra…and he actually says yes.But the cool morning light shows me how badly I’ve endangered our friendship. And I don’t know if anything will be the same again.

Heartland. A new edition to the True North series. My favorite series by Sarina Bowen. I can’t wait to read this. I haven’t read a lot about Dylan, but that’s gonna change now.

I always had two favorites in the True North series. Griffin and Jude. I liked the rest of the men as well, but just weren’t my favorite. Now I have three. Dylan is certainly one of my favorites. What a treasure of a kid. He plays the tough playboy, but there is so much more in him and I think it is really beautiful that Chastity has seen that in him all along.

This story is really a slow burn and I think it was great, because if it had been different, it wouldn’t have been right. You slowly get to know more Dylan, while Chastity is already clear from page one.

And then Dylan’s friend. Rickie. Man, that guy was super fun. I hope he will get his own book someday. He had really great insights.

While reading Heartland I cried and laughed and boy, both Griff and Dyl are so misunderstood. It hurt my heart. It really has a scene and that is my favorite. I still remember it clearly, but I’m not saying anything, because I don’t want to ruin it for you.

For me, this book is a really nice new addition to True North and one of my favorites in the series.

I loved it. Another addition to my favorites.

Break Me by Meagan Brandy