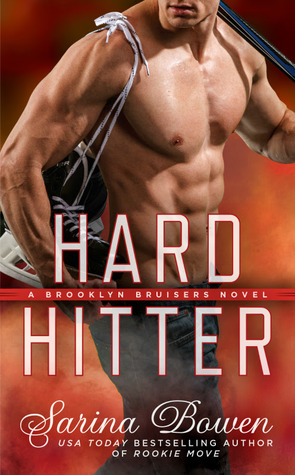 From the USA Today bestselling author of Rookie Move comes the second novel in the series that’s hot enough to melt the ice.
He’s a fighter in the rink, but he’s about to learn that playing nice can help you score...


As team captain and enforcer, Patrick O'Doul puts the bruise in the Brooklyn Bruisers. But after years of hard hits, O'Doul is feeling the burn, both physically and mentally. He conceals his pain from his coach and trainers, but when his chronic hip injury becomes too obvious to ignore, they send him for sessions with the team’s massage therapist.   After breaking up with her long-term boyfriend, Ari Bettini is in need of peace of mind. For now, she’s decided to focus on her work: rehabilitating the Bruisers’ MVP. O'Doul is easy on the eyes, but his reaction to her touch is ice cold. Ari is determined to help O'Doul heal, but as the tension between them turns red hot, they both learn that a little TLC does the body good...
From the Paperback edition.

I literally cannot think of one thing I hate about Sarina Bowen’s writing style. This one is from the he/she perspective, so I had to get a little used to that, but it didn’t take me long. I’m not gonna repeat previous reviews, but Sarina is my queen. She shares the throne with Elle, you all know that. And this book is a gem.

An old Buddhist monk told me once that the mind is like an untrained monkey. If you don’t give it something to do, it will tear your house apart and smear shit on the walls.

My opinion on Hard Hitter

I listened to this book and I don’t do that often. For once I didn’t breeze through the book, but I wanted for once to give listening a good try and I figured if I couldn’t do it with a Sarina book, it wasn’t for me.

But this book made me listen, it sucked me in. The narrators were perfect and their voices really matched Doulie and Ari’s in my head. I was very curious about O’Doul, because I already met him in the first Brooklyn Bruisers book where he was very quiet. Sarina is quite good in broody, quiet guys with inner monologues and I love those and can work with them. She did a lovely job and put down a perfect Doulie on paper.

This book wasn’t about sports and the fact that Ari is their masseuse. There was a bit of angst in the book with an ex of Ariana. He became quite the threat. I really liked it, because mostly it’s just fun and games in sport NA, but now there was a little twist. I really liked it and it was done really well.

Remember when I gave you that speech about how everyone has different reactions to massage? Some people fall asleep, some people cry… there’s probably a dent in my table from all the boners.

I really liked the book and the audio is great too!

The Envy of Idols by C.M. Stunich