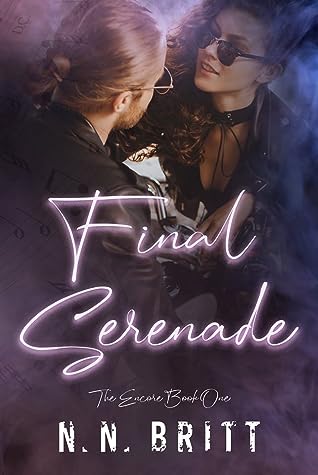 A secret affair with your teenage celebrity crush? Yes, please!
Music journalist Cassy Evans believes her career is made when she snags an exclusive interview with rock singer Frankie Blade.
Once a superstar of the generation, Frankie has been a recluse since a freak motorcycle incident sent his career into a tailspin seven years ago. Now that he’s returned to claim back his crown, Cassy hopes to kill two birds with one stone—secure her magazine a top spot in the rankings and meet with the man of her adolescent dreams.
A dinner invitation isn’t what she expects to get out of this interview, but the chemistry between them is undeniable.
With paparazzi watching Frankie’s every move as the two jump into a stormy relationship, Cassy risks her career and her privacy—and possibly her heart—to be with the biggest rockstar on the planet. But is Frankie worth it? Is he the humble man she thinks he is or is he just that good at hiding his demons?
Final Serenade is the first installment in “The Encore” series. Cassy and Frankie’s story concludes in One Last Verse.

Final Serenade is the first book I’m reading by N.N.Britt. I have no expectations and am especially curious about her writing style.
However, I have read band novels before, so I am very curious.

N.N.Britt has a pleasant writing style. The book is from one perspective, that of Cassy, and in the present tense written from the first person. It is easy to read and she writes about stuff in a very visual and substantive way. I really liked that about this story.

I had to get used to it. This book is not only focused on the relationship. Much of Cassy’s work as a reporter for a small music website is incorporated into the story.

Do not get me wrong. It is done very well and beautifully. It was detailed and well worked out. Frankly, it really gave me a kind of glimpse into the world feel. I thought that was done very well.

Usually these kinds of books are mainly about the girl who falls for the pop star and all their moments together. But because the girl had an important job in this story and this did not just disappear, it was well incorporated and remained incredibly credible. Cassy is strong and remains a strong woman with a good career.

Frank is intriguing. And I’m not even talking about his pop star status. After his motorcycle accident, after which he disappeared for 7 years, it is difficult to gain insight into his psyche. This is because Cassy also finds it difficult to get through the walls. The walls that show what he’s really struggling with. It makes this a raw and real story and I hadn’t seen that beforehand. Not this way.

I saw the end coming, but it is still very strong and a very cliffhanger. I am very curious about part 2.

Do you want to buy this book? Check Amazon!