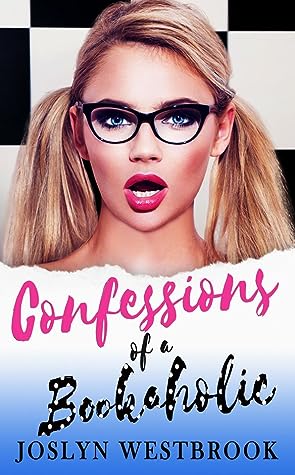 What happens when a book blogger accidentally publishes her digital diary online?A viral shitstorm, that's what. No way did I want thousands of subscribers to read my confessions--yet, that's precisely what went down last night after four too many Cosmos with my girls. Now, Damage Control is my new middle name because my diary confessional has my roommate, Lucas Stone, written all over it. Literally. I've been in love with him forever--well, ever since I saw him sprint across campus naked during our first year of college. And now that Lucas knows how I feel about him? Well, things are destined to get awkward.Because Lucas Stone, my BFF--the man who sleeps only one room over--just got engaged. And his fiancée isn't me.

I signed up for Confessions of a Bookaholic because the blurb sounded really hilarious. A book about a book blogger. Well, I wanted to read that.

Joslyn Westbrook puts down a fairly light-hearted story on paper with Confessions of a Bookaholic. It is written from both Lucas and Macy perspective and from the first person. I personally find this the best reading experience and was happy with it. It is not part Macy, part Lucas. Macy has more parts than Lucas, but the fact that you sometimes read from his perspective was nice to gain insight into his head. Westbrook’s story reads well and you go through it pretty quickly.

Confessions of a Bookaholic

I’m going to divide this part of the review about Confessions of a Bookaholic into a pro and con part. Because my head is very much in it right now.

The book is a great read and I am sure you can enjoy it in the sun. Great for a summer at the pool. It is a sports romance which is perfectly nice and a wonderful friends to lovers novel. I thought it was a fun and cute story. The side characters are really great. I would like to know more about Sage and AJ. That seriously seems like a very nice couple to read about.

I also found Macy’s clever comments very entertaining. Lucas is very sweet and thoughtful and Macy is a typical girl next door girl, which gave the story a high cuteness.

I expected something completely different. I was expecting a nerdy heroin who’s with her nose in her books a lot. She reads exactly 0 books throughout the story. I expected her to blog a lot because according to chapter one she has a big blog with even an accompanying app. You don’t give that up suddenly. She blogs exactly 2 times in the whole story, the second of which is really totally out of character for me. Since she was ashamed of the first accidental post she deleted and then she will write a follow up post about it … very strange.

Then it was a very cliched story between two friends who are in love with each other, but actually don’t stand up for themselves at all, but always presume things, which make it go wrong again and again.

Then we had a job offer, which kind of doesn’t get mentioned in the story anymore due to certain events (says nothing because spoilers), until almost the end, where it comes in handy to let the story end well.

As you might notice I was very annoyed with the points above, so that’s the reason the book really doesn’t exceed 3 stars for me. Very sorry, because I had bigger expectations.

A story that will not stick with me, but it is fun to read by the pool.