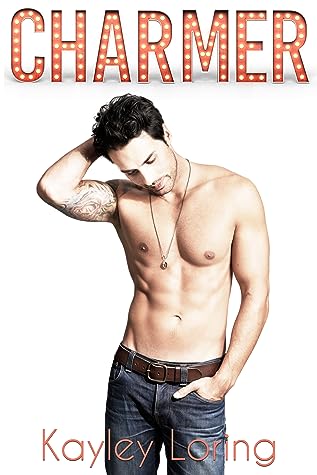 She serves me coffee late at night when I come around to write lyrics,
but it’s not the caffeine I’ve gotten addicted to.

We’ve got the spark, but she’s the only woman in town
who seems to be immune to my charms.

When it’s time for me to leave for my cross-country tour,
I just can’t imagine not seeing her for months.

So I offer her a job on the road with me.

Everyone in LA knows that Nico Todd has a way with songs and with the ladies.

What he doesn’t know is that I would love to let him have his way with me.

But my life can only revolve around one infuriatingly cute guy—
the six-year-old that I live with.

Imagine my surprise when Nico finds out about my little boy
and tells me to bring him and my mom on the road too.

And imagine Nico’s surprise when he realizes my son
is the biggest charmer of them all.

Oh, a singer-songwriter. That’s different from a band. I’m very curious about Charmer. Let’s find out.

Kayley has a nice writing style. It’s easy to read and you fly over the pages. The world is really coming to life. She writes from the perspectives of both Nico as Kat. I really like that in books. I don’t have anything particular to say about it, actually other than it was a good writing style.

My thoughts about Charmer

It was an ok read for me. I liked the style, liked the characters and the story was just fine. So I did give it 3 stars, because the book isn’t the problem.

I think I’m the problem. I’ve read a lot of dark romance and I just missed.. not the dark. Just twists and turns. Something unexpected. Everything just flowed in this story. It just followed the curve of the river. I just missed a twist or something in the story. Plus I didn’t really get a star-feel. Like he was on a tourbus and at night he needed to play his songs… but I don’t know… I just didn’t get the feel.

I really liked that Tate, Kat’s son, was a huge part of the story. Most of the time you read that chars have kids, but you just occassionaly see them, but not in this story. I also loved Kat’s mom as well as Nico’s grandma. They had awesome oneliners which I really appreciated.

It was an ok read overall for me and I think a lot of people will enjoy this story. It just isn’t one I will remember on the long term, I think. Which is totally fine. I still enjoyed it.

A lovely read, which was very enjoyable.

Till The Last Lyric by M Robinson

The Bane Chronicles by Cassandra Clare