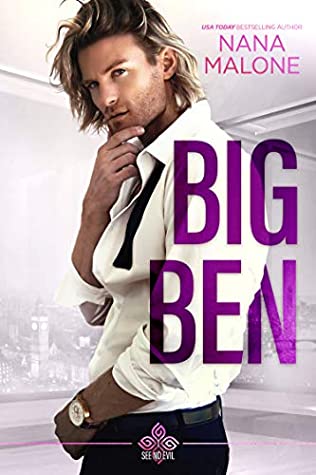 It began with betrayal.And ended in murder.
She was never supposed to cross my path. She was never supposed to know about the Currency of Secrets or the Oaths of Blood.
But like a thief in the night, she stole my soul even if she wasn't mine to possess.
As a member of the Elite, I live by simple tenets. A gentleman above all. Private matters stay private. Secrets whispered are never revealed. Enemies and friends are of the same coin. And power is king.
My so-called brothers killed my friend. I intend to make them pay.  And before it's over, I'll bend all the rules of morality, decency and legality. I will borrow and steal to set the scales right. But begging--begging, you can forget about.
My name is Ben Covington and I know my sins.

I have read a lot by Nana Malone already, so I loved that I could read an Arc of Big ben.

I always love reading Nana’s books. This is not the first time I have read anything from her. I practically devoured the Royals world of hers.
Her books are always an easy read. In just one sitting you can read the first book of het Royals world.
You can read atleast eight of hers in a whole day!

“And you were going to, what? Interrogate him about what he was doing with you in the closet? Get real.”

My thoughts about Big Ben

Well, I don’t know were to begin. Let me say that I love the guy on the cover and I absolutely liked the nickname they gave him in the book.

It took me a while to get into this story. Sometimes it was a bit confusing. But after a while I started to like it.

I am not sure what the Elite means in this book and that part confuses me a lot. Nana probably hold back any information on this to make you want to read the second book more.
This also meant for a couple of the characters. I didn’t find them interesting because they were flat

I did love how she combined the world of the royals with this world! Only names were mentioned but still, I liked it a lot.

“Ah, like the princess. I’m Ben. You can call me Big Ben, though. I don’t falsely advertise. Bram here, well, he’s known for having a little prick. And, you know, generally being a prick. Just his Mummy’s errand boy.”

A lovely book, sometimes a bit confusing but hey that happens sometimes. If you don’t know the other books by Nana, I would definitely recommend them.
The best part about this new trilogy, we don’t have to wait long for the two other books!