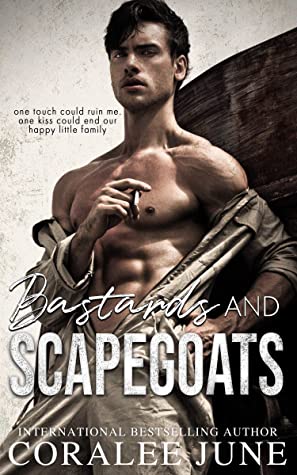 The first time I saw Hamilton, he was balls deep in one of the bridesmaids at my mother’s wedding.

He was lethal. Handsome. Cruel. Twisted.

I was drawn to him like fists to glass. We had an angry sort of relationship. There was nothing kind about the broken man that stole my heart and crushed it in his fist. He was all sharp edges. One touch could ruin me. One kiss could end our happy little family.

Hamilton escaped with scars to his name and a ruined reputation. And now? I wanted out, too. I guess the scandal of our relationship was the least of our family’s problems.

A new duet by Coralee June. The first one is called Bastards and Scapegoats. Her last duet A Lovely Obsession I loved thorougly, so I wanted to read this really bad. Keep reading for my opinion.

Wow… I didn’t see that coming…

Okay, start at the top. Taboo crush
Been there, done that. But it’s Coralee, so I thought, I want to read it, because it will probably be different.
And it is.

It was the taboo of taboos. Younger brother of her mother’s husband within a family of politicians. Woah… talk about taboos.

I thought Hamilton was putting it on thickly quite a bit. That annoyed me the most, but at the same time I was so damn intrigued by what he was implying. It wasn’t full in your face, but I could feel it simmer under the skin. It intrigued me and I wanted to know more.

The further I got, the more I got sucked into the story and the more I wanted to know. I also noticed that this was happening to Hamilton as well. He became more and more serious, more into Vera.

Vera was a bit naive at times, but she was only just eighteen and had never dealt with politicians. Her gut feeling, however, was spot-on and I really liked that about this character. Neither was she whiny, but admitted she was carried away with everything that happened. She was very honest with herself about everything and to be honest I really liked that.

And at the end a number of points came together which really leaves you with a huge hangover because you want to know how it goes on.

Conclusion about Bastards and Scapegoats

And oh boy… go read it…
And that fucking cliffhanger…
Can’t wait for the second part!